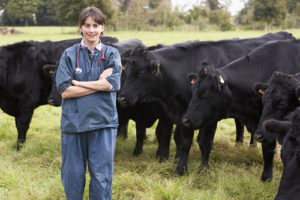 In the first of a series of feature articles in Veterinary Record discussing the state of different sectors of the veterinary profession in the UK and what the future might hold, Jonathan Statham and Martin Green give their perspective on developments affecting the provision of cattle veterinary services.

THERE has been much debate about how the cattle veterinary profession must reconsider current business models and prepare for new and increasing challenges in practice. Global economic uncertainty is currently combined with dramatic price falls in much of the UK dairy and wider cattle industry. The UK is confronting high costs of production within a fierce global food production market, with the added problem of poorly informed consumer groups. There is also increasing concern regarding the environmental impact of the livestock sector. So, how should cattle veterinary practice change to meet these demands?

Traditional UK farm animal practice remains dependent on the sale of medicines (often at a significant margin) together with government-derived income streams (Table 1). Leading vets have promoted prevention over cure since the late 19th century, and a more preventive approach to practice has been advocated repeatedly since 1938 by government-commissioned inquiries into the veterinary profession (Woods 2007). Why has change, therefore, not occurred previously and what, if anything, may be different now?

The catastrophic outbreak of foot-and-mouth disease in 2001 prompted a strategic government review. From 2006 to 2008, Defra pump-primed an approach to preventive herd health. Farm health planning involved practising vets working with their farming clients to measure, manage and monitor livestock health. It formed a central part of delivering the Animal Health and Welfare Strategy and was driven by fears for the future of farm animal veterinary practice at a time of poor livestock health, declining farming profits, and heightened public health fears about agricultural antibiotic use. It also offered an opportunity to devolve the financial burden of stewarding food production from government to the industry (Statham 2008).

Spiralling costs of government-funded disease control initiatives, such as those for TB, brucellosis and meat inspection, had seen tendering and Treasury-based pressures for cost cuts bear down on vets in practice. This followed the findings of the Competition Commission that complex monopolies existed in the provision of veterinary medicines into the farming sector, resulting in the implementation of a three-year period of enforced free prescriptions together with a drive for greater transparency and competition, along with a burgeoning internet market opportunity. Concerns expressed by bodies such as the BVA about the future viability of farm animal practice prompted a review of veterinary expertise in food animal production by Professor Philip Lowe, which was published in 2009 (Lowe 2009).